The 1964 World's Fair Bench produced today by Kenneth Lynch & Sons is also known as the Flushing Meadows Corona Park Bench, based on the original design of the 1964 World's Fair which was held in Queens, NY. While the original benches for the World’s Fair were made of cast aluminum, the futuristic material of the time, our model is made of virtually unbreakable ductile iron. 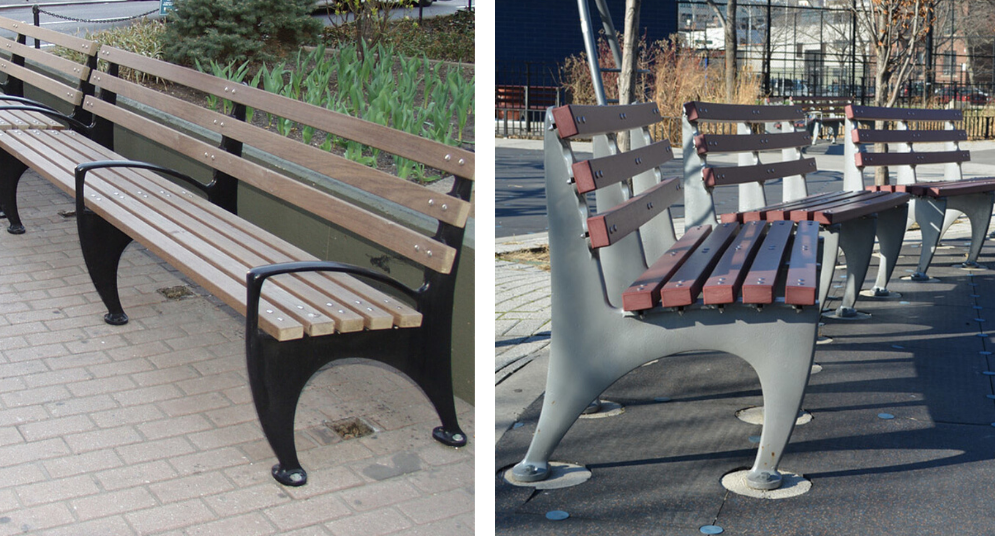 The design of the bench, with its asymmetrical swooping arches, is futuristic and sleek to fit the modern optimism of the World’s Fair theme. In 1995, Kenneth Lynch & Sons worked with the New York Parks Department to re-introduce the 1964 World’s Fair Bench model with a new design that included integral armrests, as well as new designs including the backless model, bike racks, and a picnic table designed in 2007 to complement the 1964 World’s Fair series. These designs have been very popular over the past years and are featured in many parks throughout all five boroughs of New York City and many suburban towns, as well as Arlington, VA and San Francisco, CA.

As Kenneth Lynch & Sons has become the premier supplier of benches in New York City, we offer almost every bench style used in the New York City Parks system, including the unique mid-century modern style of the 1964 World’s Fair site furnishings. Upon specific requests, we often customize the benches with a range of colors to better fit its surroundings for certain parks or playgrounds. From bright red, to blue, yellow, and green, we are often called upon to produce a range of custom colors to add character and joy to park settings.

Kenneth Lynch & Sons has customized the benches with a range of colors to better fit its surroundings for certain parks or playgrounds. The lime green bench can be found in Astoria, Queens today.

Over the years, we have also increased the use of recycled plastic lumber in producing the benches. Since plastic lumber does not have the same strength properties as traditional lumber, we have devised a steel support system to provide additional strength while still maintaining the overall bench design.

The Unisphere was commissioned as part of the 1964 New York World's Fair and still stands today in Flushing Meadows-Corona Park in Queens, New York City. As do our benches! Photo credit: Beth J. Harpaz, The Associated Press.

Kenneth Lynch & Sons benches are an integral part of the urban landscape and have been enjoyed every day for decades by millions of people. The 1964 World’s Fair benches are still enjoyed today in situ at Flushing Meadows Corona Park. Our next project is working benches for Bronx Point Park, which will house the Universal Hip Hop Museum.

The next time you are in New York City, see if you can spot a Kenneth Lynch bench and take a seat and enjoy! We are proud that our benches have graced parks, both grand and modest, and look forward to providing quiet moments to the public for decades to come.

The Ladies on the Bench photo street photographer Garry Winogrand, capturing friends sitting on the 1964 World’s Fair benches during the World’s Fair, and a modern view of the benches with the unisphere pictured in the background. Photo credit: Alexandra Charitan.