In honor of the 200th anniversary of the birth of Frederick Law Olmsted, the founder of American landscape architecture, we welcome you to our series of interviews featuring Olmsted parks across the nation.

Learn more in our interview with Kathy Ezzell of the Olmsted Parks Conservancy in Louisville, Kentucky.

What was Olmsted’s vision for the parks in Louisville?

When Louisville was established on the banks of the Ohio River, it was soon decided that there would need to be a place to escape the smog coming from the coal mining industry in the city, much like New York City’s Central Park was an escape for city dwellers. In the early 1890s, Frederick Law Olmsted was hired to design the Louisville parks system, in turn making Louisville one of only four complete Olmsted park systems in the world.

Left: Map of the parks designed by Olmsted in Louisville. Right: View from the trails of Cherokee Park.

Are there any unique features to the parks?

Each park is very unique in its landscape. Cherokee Park is characterized by long winding roads opening to beautiful vistas and has lots of wildlife. Iroquois Park, noted by early park users as Louisville’s own Yellowstone, has dramatic views that can be seen from the North Overlook and is home to the Iroquois Amphitheater. Shawnee Park is set on the banks of the Ohio River with beautiful views and includes the Great Lawn, a signature Olmsted design feature for large formal gatherings, and also went through a series of recent improvements including restoring of the Lily Pond and the addition of chess tables.

As the Olmsted Parks Conservancy continues Olmsted’s legacy in honoring the original designs, how does a classic bench design from the early 19th century still fit into modern landscapes today?

The World’s Fair Bench is the predominant bench in all seventeen of Louisville’s parks. It has a timeless design that fits seamlessly into all the different parks. Louisville also has a Central Park, and as a nod to New York City’s Central Park it is the only park that is painted in the same green finish as the Central Park benches. Other metal benches throughout the park are being replaced with the classic World’s Fair Bench.

Do you have a bench dedication program at the parks?

Yes, our park visitors love the benches and we do have a Bench Tribute program. The program offers the opportunity for a bench to be “adopted” and personalized with a message on a plaque. The Conservancy will work with you to find the perfect location in one of the Olmsted Parks. It’s a very meaningful program for many people and folks love to decorate their benches for the holidays or special occasions.

There is one story of a gentleman that came to us looking to adopt a bench and didn’t say who it was for right away. We worked with him to find the perfect location and he decided on a spot in Seneca Park near an airfield where the planes come in to land. It turns out that the bench was in honor of his thirteen year old son who had passed, so it was a very emotional process.

We have a photo of one of our crew members sitting on the bench after they installed it, and there’s an airplane flying in. I sent the gentleman that photo, and he said that it really solidified it for him that it was the perfect spot for his bench. As it turns out, he and his two sons had flown out of that airfield the year before one of his sons passed, so it became a beautiful way to honor his memory. That is just one example of how important these benches are to the people. 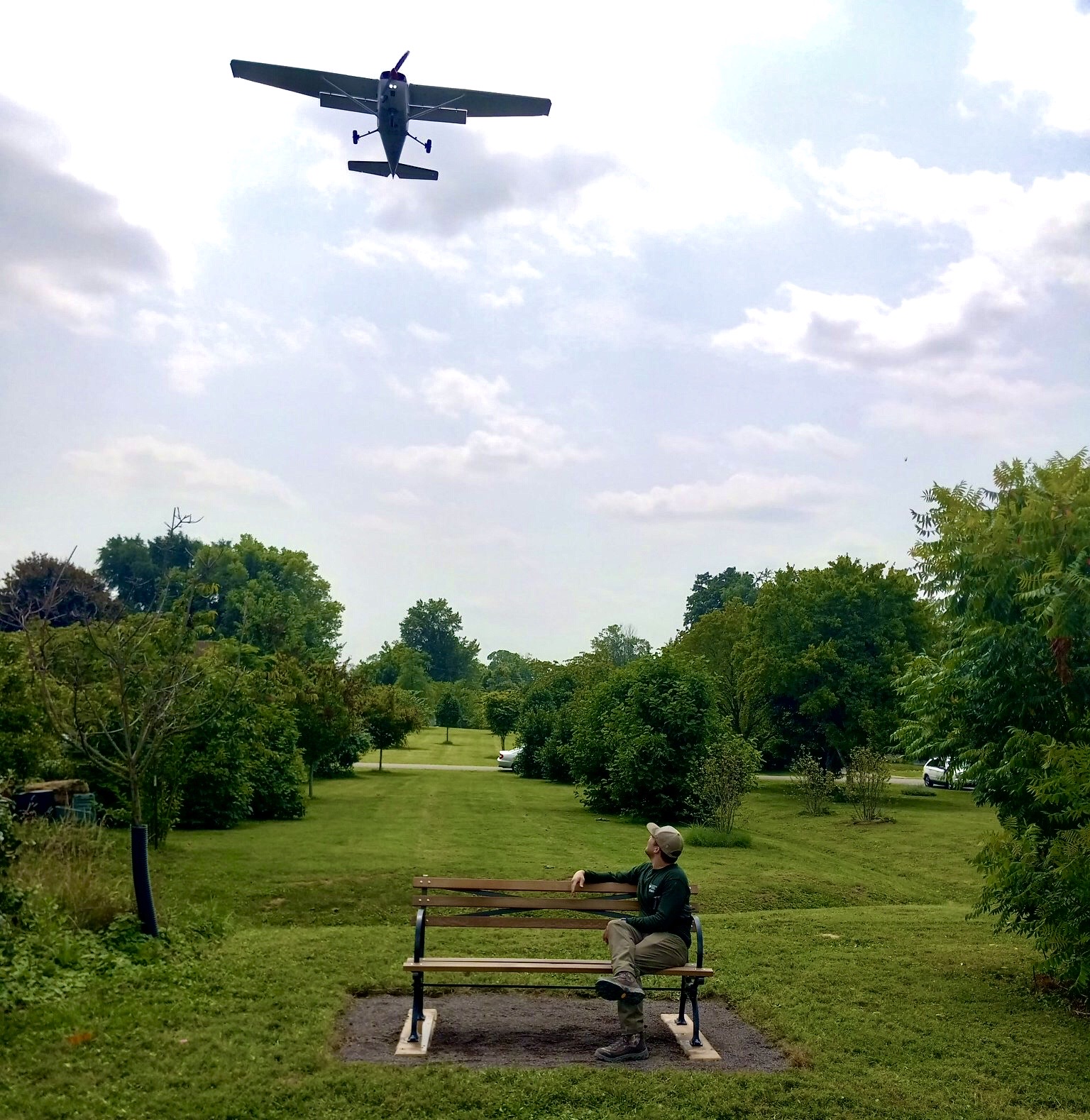 Tribute bench installed in Seneca Park near an airfield.

What are the continuous preservation efforts of the Olmsted Parks Conservancy?

We have many different initiatives happening, but one that comes to mind is the Team for Healthy Parks. We have a crew that works in the natural woodlands of the parks to remove invasive plants that are a danger to the landscape and preserve the natural areas of the parks.
We also have a Volunteer Program with over a thousand members each year who help with planting trees and mulching, and we advocate against encroachment in the parks.

What programs or events are offered at Louisville Parks?

We have large community events with food trucks, entertainment, and music throughout the year. In the summer, we offer free programming for youth including pop-up “free play” activities where kids can get creative by building with string and cardboard. In the fall, we have tractor hayrides for families, and we also give back to the community with giveaways and coat drives in the winter.

What is your favorite park in Louisville?

My favorite is Cherokee Park because you can really immerse yourself in nature while still being in the city. There are many trails to explore, including the 2.4-mile scenic loop that takes you through a pastoral setting, open meadows and woodlands of the Beargrass Creek valley.