Frederick Law Olmsted (1822-1903) is considered to be the father of American landscape architecture. Throughout his career, he was able to master turning beautiful outdoor spaces into transcendent experiences for visitors. Olmsted designed over 500 landscapes during his time, including 100 public parks that are enjoyed by millions today.

As a landscape architect, Olmsted was very intentional and strategic in how he approached park design. According to the Buffalo Olmsted Park Conservancy, Olmsted believed the purpose of green space was to “refresh and delight the eye and through the eye, mind and spirit.” To this day, Olmsted parks offer an extraordinary experience for park visitors, complete with beautiful scenery mixed with classical architecture among the natural elements of outdoor spaces. 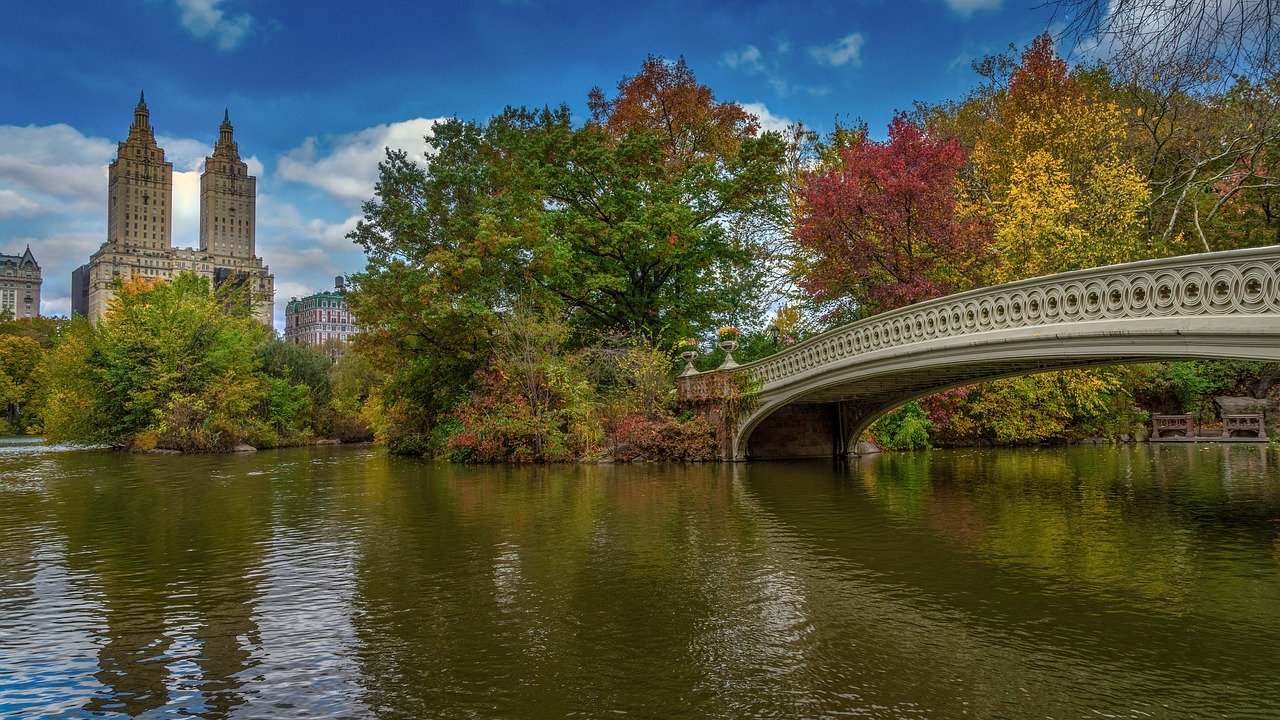 
Similarly, our founder, Kenneth Lynch, understood the importance of design in enhancing and completing outdoor spaces. In the 1930’s, Lynch worked on the design of what is now known as the 1939 World's Fair Bench. The bench needed to maximize comfort and to fit the World’s Fair Bench theme, “Building the World of Tomorrow.” To this day, Kenneth Lynch & Sons continues to manufacture the iconic 1939 World's Fair Bench and is the preferred manufacturer of the bench due to our accuracy to the original details.

What is the connection between Kenneth Lynch & Sons and Olmsted parks? Many iconic pieces from the Kenneth Lynch urban seating collection can be found in Olmsted’s parks today, including this iconic 1939 World's Fair Bench. The historical preservation that is associated with Olmsted Parks and the design aesthetics and timelessness of the Kenneth Lynch & Son’s benches go hand in hand in maintaining uniformity throughout the park designs. 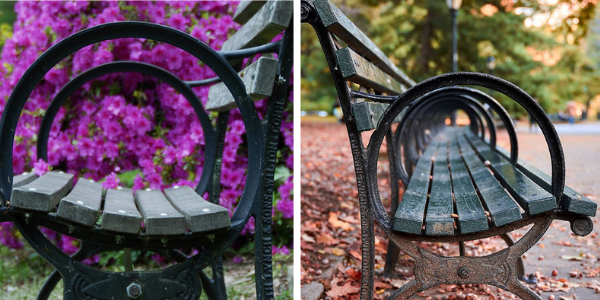 If you visit Olmsted designed parks today, see if you can find the Kenneth Lynch & Sons benches. You can find our designs in many notable Olmsted parks including Central Park and Prospect Park in New York City; Delaware Park in Buffalo, NY; Cherokee Park in Louisville, KY; Beardsley Park in Bridgeport, CT; and more. 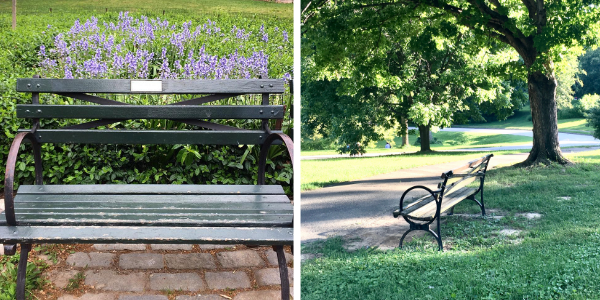 Olmsted's Parks were carefully designed to create transcendent experiences for visitors. Pictured on the left is a Kenneth Lynch bench in Central Park (@lensbysarah) and in Cherokee Park, Louisville pictured on the right.

Central Park
New York City, New York
The New York State Legislature approved the establishment of Central Park in 1853, and it was during this time that the design competition for the park was announced. Olmsted worked with Calvert Vaux to create a design for the park called The Greensward Plan, which combined natural elements with classic architecture. The Greensward Plan won the design competition for Central Park and Olmsted became the architect-in-chief of Central Park over the next seven years. Olmsted’s signature design style can be seen in the placement of the Bethesda Terrace and the many ornate bridges found throughout the park.

Additionally, the iconic Central Park Settee produced by Kenneth Lynch today is a design used during the creation of Central Park. Kenneth Lynch & Sons re-introduced the classic design of the settee in 1994 and continues to supply the New York Parks Department with the benches to this day along with the 1939 World’s Fair Bench. 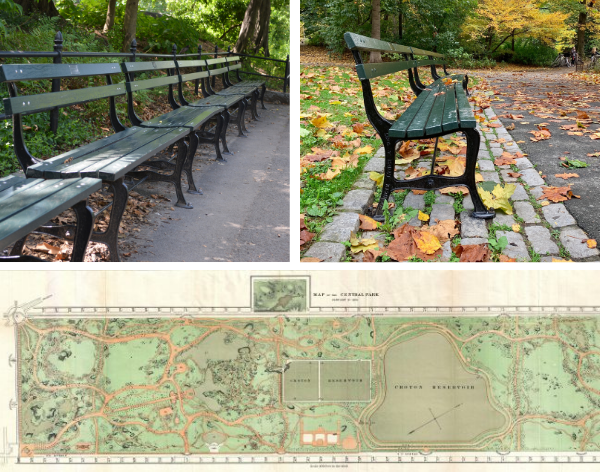 Prospect Park
Brooklyn, New York
Brooklyn’s Prospect Park was also designed by Frederick Law Olmsted and Calvert Vaux and opened in 1867. The main entrance to Prospect Park is symbolized with the grand Soldiers' and Sailors' Arch in the Grand Army Plaza. Olmsted’s signature design of Prospect Park is apparent in the intentionally-placed Boathouse overlooking the scenic Lullwater Bridge, the Meadowport and Endale Arches that line the walkways.

The Kenneth Lynch Central Park Settee and 1939 World's Fair Bench can be found in Olmsted’s Prospect Park today. Much like at Central Park, these benches can be adopted to commemorate a loved one or a special occasion with a personalized plaque through the Prospect Park Alliance. 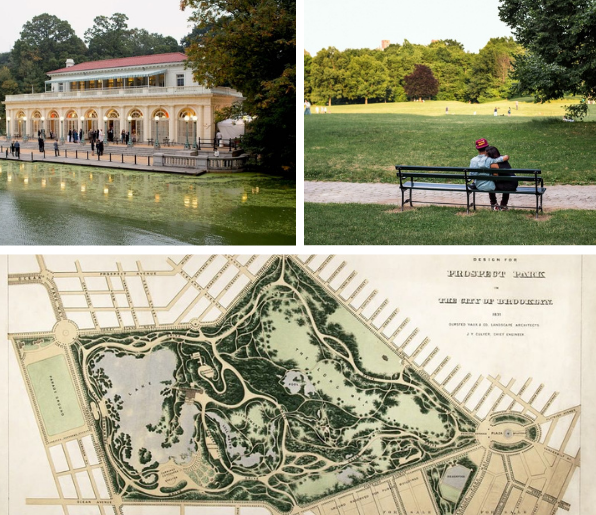 Cherokee and Iroquois Parks
Louisville, Kentucky
Iroquois Park has been noted as “Louisville’s own Yellowstone” for its rugged terrain, mature woodlands, steep hillsides, and a variety of rare plants and animals. The park provides a beautiful scenic overlook for its visitors, and of course, an intentionally designed pathways that integrate the visitors experience with the depth of nature. Olmsted imagined that the park would "provide the grandeur of the forest depths in the dim seclusion of which you may wander musingly for hours."


Cherokee Park is another one of Olmsted’s designs, characterized by long winding roads opening to beautiful vistas, and large open spaces set in the valley of Beargrass Creek. Olmsted designed it “to be a place where one could experience scenery and take in the refreshment offered by the landscape.”


Today, visitors can take a seat on the Kenneth Lynch & Sons 1939 World's Fair Bench at Olmsted’s Iroquois and Cherokee Parks. 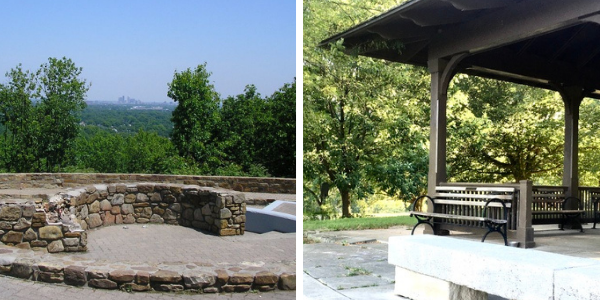 Delaware Park, originally named The Park by Olmsted, was designed by Olmstead and Calvert Vaux in 1868 and 1876 in Buffalo, NY. The park is said to have been inspired by the boulevards and greens of Paris. The park includes vast open spaces of rolling hills, walking paths, and a carriage drive. The park is nationally recognized today, named one of the Great Places in America by the American Planning Association in 2014, and one of the Top 10 Parks in the World by The Guardian in 2015. A main attraction of the park today are row boats available to visitors on the park’s Hoyt Lake.

If you visit Buffalo, be sure to stop by Delaware Park and see if you can spot Kenneth Lynch & Sons 1939 World's Fair Benches throughout this beautiful park! 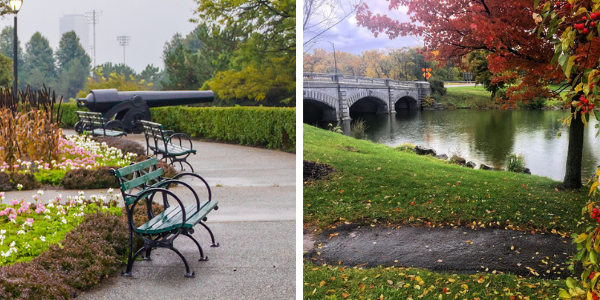 How Kenneth Lynch Shaped the Benches of Central Park